Roll Me A Fatty

BBWs or Big Beautiful Women have more body mass and therefore more to offer than the average skinny woman. These Chunk-a-lunks are as hungry for love as they are for a chocolate covered twinkie. Move over super model types; these large lovelies are taking over!!! Guys, get ready to kick back and Roll Up with a Fatty!! Karla Lane is our thick and very lovely cover girl. Her pretty face is complimented by 2 massive tits, capped with areola that alone, are larger than most average girls entire tits. Her body is thick her legs haul around many extra pounds of meat for her boyfriends to roll up into. Her ass, hip and vaginal area is mostly clean and shaven, despite it being large enough to back a semi into. She drops to her chub-covered knees and sucks some cock, before dropping on all fours and getting her ass smacked and her pussy fucked. Despite her massive size, her pussy is rather tight and she begs for it harder and harder while working our cock over real good. From her pussy to her mouth and between her tits too, Karla is a horny chick who loves to fuck and is really nasty. She gets a large sized cum punch painted across the bottom p art of her face. Celeste is all natural and naturally a very large woman. She has white skin, torpedo tits with light brown nipples and a large sumo wrestler shaped belly. Black men tend to like large ladies and we found one who wants to give her his cock to feed on. Just likes the yummy dark chocolate, as she gnaws away at his fat shaft, before laying back on her fat ass and readying her fat hairy vagina for a flushing. She jumps on top and works her giant hips up and down smothering his black penis and pounding his inner thighs. Her big boobies bounce and spin in circles as he pulls out, whacks it around and deposits a stringy one across her jelly ridden chest. Glory Foxxx is a giant woman with an enormous appetite for sweets and an even bigger appetite for both white and black cocks. She is a pure white girl with dark hair who attacks 2 erect peniss like they are the last 2 cookies in the jar. She lays out like a beached beluga with massive mummeries and a nearly hairless fuck hole. The little hair still remaining around her hole is likely inaccessible to any razor due to all of her fat flaps and rolls down there. The 2 guys do their best to cock feed this giant, but she barely feels anything they do, as there is just too much real estate for 2 cocks to handle. Her massive hips and cellulite ridden ass smother both guys, as she hops on top and nearly suffocates and crushes one of our guys nut sacks. She starts to get off, as her bright white butt cheeks start to loosen and suck up the black pipe even deeper. She cums hard, as one cock dribbles on her face and the other coats her with a large whip cream batch for her to eat for desert later. Entyce is a thick Latina chick who can handle a lot of cock. This curly brunette gets her chance at 2 big black ones today. Her big tits droop and sag to her stomach, with her firm nipple tips extending well beyond that. She manages to shave her cunt well, despite being a fatty and certainly has no problem sucking on one cock while taking another one between her hefty legs. She gets it good and gets off hard, spreading her giant sunflower open and getting it every which way possible. She gets one large and one slightly smaller cum dumping across the bottom of her face, as it clings from her chin. Leola Rose is a pale white piglet with a load of extra pounds on her body. She loves to put things in her mouth and one big black cock along with another modest white one is a good start. Her tits are slightly small considering her overall size, but her pink nipples are pierced and as she lays back and takes a vaginal stabbing, thick slush starts to build up deep inside her. The sound of her fat slapping is deafening, as our skinny white guy on the scene gives this fatty more than her fair share of muff stuffing. She wants her ass smacked around more, as she sucks a black nut up and takes a load on her tit, before whitey pulls out and absolutely cum coats this chubby chick with buckets of jizz. Lorelai Give More is a big fat white chick who is hanging out with her skinny Asian girlfriend who has big tits and braces. The Asian girl takes up less than half the entire mass and space Lorelai does and she maybe weighs as much as just one of Lorelais legs. The 2 are each sucking on a cock, with the Asian girl showing much more appetite than her obesely overweight friend. Lorelai bends over and takes it from behind while gagging and choking on the other dick. She does not handle the stuffing nearly as well as a fat girl should; her pussy slightly dehydrated and well out of practice. We congratulate her efforts with a solid cum spilling from one guy and a couple of tiny droplets from the other. She licks up all the extra protein scattered around.

Show all movies with Karla Lane

Show all movies with Celeste (general)

Show all movies with Glory Foxxx 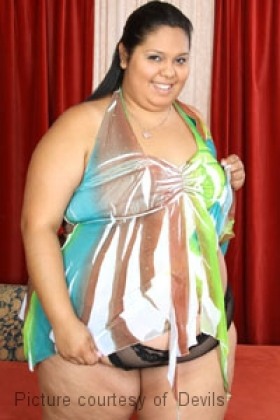 Show all movies with Lorelai Givemore

Show all movies with Entyce

Show all movies with Leola Rose
to top