Let it Snow, Let it Snow, Let it Snow! It's time for April's blizzard of a gangbang to begin. The Cocksmen just couldn't stay away from those luscious lips of hers, topped by that bodacious bush, so the opening shot has Chris with his mouth buried between April's legs to GREET THE PLEATS. They couldn't wait too long before diving into April with their shafts to feel her from the inside, though. Soon the Cocksmen are sharing her for a first feel of her velvety wetness. Her weeps of ecstasy are muffled only by the constant supply of dicks she has shoved in her mouth. You can still see in her eyes how happy she is. April is having the size limits of her tight pussy tested today with a selection of our girthier Cocksmen today. She stays mish for a while since Chris has her firmly tied down to the pedestal with the blue ropes. Later he uses those same ropes as a leash as he fucks her. After using the vibe on herself for a while, April plays a game of &quot;Spin the Vibrator&quot; to see who she will fuck next. Eddie Jaye comes up the winner as he flips her over for some doggy while she simultaneously sucks Alex. This turns out to be a popular position as all the guys take a turn in different combinations while April manages to keep the vibe on her sensitive clit the whole time. How can she concentrate? Next it's time for some rides and some 'pies! Eddie drops the first of FIVE CREAMPIES in April today while she rides him hard (still vibing herself, by the way). The vibe makes April SQUIRT hard as Eddie shoots his load up in her. She straddles the pedestal next for some spit- roasting action, followed by some lazy doggy when Jon Rogue gets to try out being on the receiving end of some nipple licking, at the suggestion of Mr. Jaye. I think April made Jon a convert. You can't argue with results as creampie #2 is a #RogueLoad.His nipples still must have been tingling because he put a load in April that is gargantuan, even by Jon's standards. The rest of the FIVE LOADS drop in quick succession, ending with an epic BUSH PIE in April's bountiful lady garden. To close things out, April plays with it until it is thoroughly worked deep into her dense forest. Vivacious Vanessa is up on the pedestal and is instantly ravaged by her FIVE COCKSMEN. Her perma-hard, fertile nipples pop right out of her dress as the guys start the taps running while Alex instantly goes down on Vanessa to GREET THE PLEATS. Chris follows suit and nearly gets Vanessa to SQUIRT before we hit the two- minute mark! He slows it down to make her last and enjoy the delayed gratification. Jon Rogue is the first to dive into Vanessa's already well-lubed pussy. The guys just couldn't wait this week! It's not like they all blew their loads early either; this week's gangbang lasts nearly an hour! Once Jon starts really fucking her, that's when Vanessa's nipples start really churning out some milk. Lactation enthusiasts rejoice; this is your week. The rest of the Cocksmen all make their first rounds as Vanessa finds something she likes about each individual dick, then tells us about it as it's in her. Vanessa is one of those multi-orgasmic girls.She gets to cum multiple times before any of the Cocksmen drop a creampie in her. Eddie Jaye moves the action over to the chair for some riding action before Vanessa strips down completely. Chris gets the next ride in the chair with Vanessa flipped around, then it's time for some spit-roasting between senior Cocksmen Kyle and Alex. Next Kyle gets a ride back on the bench before the action switches back to mish. Chris gives Vanessa her biggest &quot;O&quot; so far that leads to her first MAJOR SQUIRT. That finally got the Cocksmen too hot to hold back the loads. Creampie #1 comes courtesy of Mr. Jaye as Vanessa squirts milk all over the pedestal. She probably shoots out as much fluid as Eddie deposits in her. Showing he hasn't lost his touch, Cocksman Kyle drops 'pie #2, seconds before Alex makes it a double-decker in her wet pussy. The wand makes its way to Vanessa's clit as she chalks up more orgasms. The Cocksmen give her FIVE CREAMPIES in her pussy, not to mention a sixth #RogueLoad on her pretty face. Vanessa finishes her hour-long gangbang a cummy mess from head to toe, but that's a good thing! 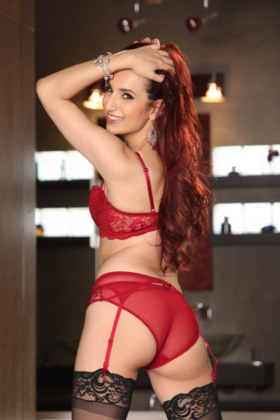 Show all movies with April Snow

Show all movies with Alex Mack

Show all movies with Jon Rogue

Show all movies with Kyle Aziani

Show all movies with Randy Denmark

Show all movies with Vanessa Vega

Show all movies with Chris Cock

Show all movies with Eddie Jaye

Stay at home and save 15% off eveyrthing!